In the Kiwanis Litchfield Park 10K, Bill Scheel finished in 44:23, for first place in his AG. His 7:09 pace was one-second faster than his Runners Den 5 Mile pace of a month ago. Bill’s overall time is a modern era PR, and 1:02 faster than the same race a year ago.

In the accompanying 5K, Patty Beckman won her AG and was second female overall, with a time of 20:33. Both Bill and Patty also won prizes in the raffle drawing!

The next morning, Tom Simpson completed the Napa Valley Marathon, with a time of 4:30:23. Congratulations, Tom!

A Quest Club member provided the following first-person account of her experiences at the 2011 Tokyo Marathon:

The marathon is all about the preparation…so I thought I would start with the uniqueness of pre-race prep “Japanese style”. …then on to the race.

I started heading to the race at 5:45 am…not in a car or taxi but by train.  Assuming you have somewhat mastered the ability to navigate the train station… you definitely don’t leave without a few extra yen in your pocket in case you make a fatal mistake and get on the seemingly right train going the wrong direction!…  ..my train this am goes from Shinagawa Station pronounced (she na ga wa ) “i” is pronounced like ee.  To Shinjuku.  It is a 30 min ride, and I am wearing my very stylyish throw-a-way sweatshirt and ski cap!  Then took a tunnelway from the station directly to the start entrance (you don’t have to go outside at all)..15 min additional walk. Shocking..I see a few homeless for the first time..in this “perfectly clean and neat city” it was a real surprise to see homeless.  For those of you who remember my previous blog… this is the busiest station in the world  (3.8M + people a day)…yet it was empty now..except these guys!

I was actually the first to arrive at this secured entrance; 20 min before 7am ..15 min later there was a huge line. They were ultra organized to the point that the line moved so quickly even though they checked that every person coming into the secured area had a bib, time chip, and our bags were free…..of whatever.  This event also boasts the most volunteers.  They report 12,000 and I believe it!  Also they said this year there was over 2.2M spectators!!  This is the most they ever had.   To give you a feel for how many volunteers this is …when I went to pick up my bib there was at least 3-4 people helping just me!  I am not even talking about 2 additional people for every chip activation station (times 7 stations) plus 10 stations for your goodie bag (times 3 people per station)  …do the math…that is a heck of a lot of volunteers just to get your race materials… 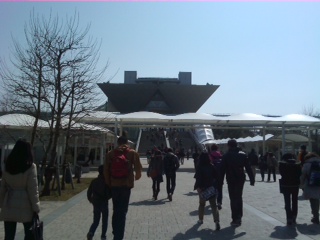 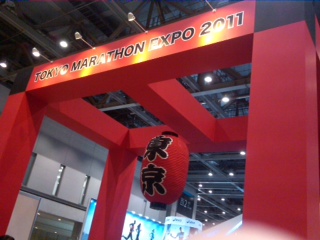 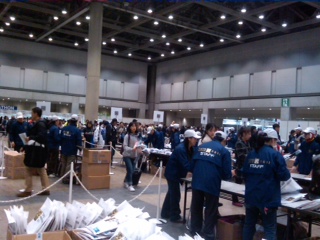 So back to the race…when you first entered you are actually going under several government buildings.  It is like being under a freeway (concrete ceilings etc)..you pass 2 tents to change into your clothes (for those modest folks)…otherwise I decided to go ahead and drop off my bag.  There were over 50 trucks ..each truck had the side open like a hot dog vendor…and each truck has 6 rows of volunteers 3 deep (per your bib #) and 6 additional guys receiving the bags inside the truck..YES FOR 50 + TRUCKS!  I know there were more trucks since my bag was in # 50 and there were still at least 5 more I could see.

No race is complete without talking about the Toilets …too funny …they had ones that said “western style”, ones with no sign, and ones without doors!  I took the conservative route ..and took the “western style”…no surprise there 🙂  However, you know how I know that a few didn’t have doors…(just men were using them..don’t worry…I think you get it.)

There was also next to no waiting at these 3 types of toilets since they were everywhere…only 2-3 people deep.  If you we’re as curious as I was…I can answer…NO there was NOT 1 person peeing on the side of the road!  (Charles will be happy to hear this) Mainly because there were people everywhere (2.2M) and toilet signs every 5k where you could just hop off the course to literally “go”.

So back to the start..it was pretty cold that morning but bearable… when they were ready to start…they announced to go to your separate entrance to be guided to the corral section from the waiting area.  Extremely organized!  The race started exactly on time…of course this is Japan.  The sun came out and within 2 miles I peeled off as much clothes as I could.  It was a sunny warm day…I could have easily been in shorts and a tank top..but settled for a thin short sleeve shirt and tights.  The day was perfect!…My luck didn’t fail me.  The day before was very cold and windy and the day after cold, windy and heavy rain!….(FYI..my luck and I are available for rent for future races)

The crowds were unbelievable !…There was not a section where there wasn’t people cheering on the course.  I thought Marine Corps was good but this blows it away!…some sections of crowds were 6 people deep!  I was fortune enough to have my good friend from my Hitachi Japan office come out and he was able to see me…all I could hear was my name and see a bobbing head …I was able to wave and connect!  He tried at 3 spots and this was the best he could catch me due to the crowds!

Of course I saw Wayne at 15K, he gets extra points since this will make his 5th appearance…he has made every single one of my marathons!…and has suffered waiting, and waiting and waiting..as he says he loves the day after the marathon “I know we get to relax!”

The people really got into it!…Plus the racers…there were so many costumes..I tell you it still hurts to be beat by a guy in a paper mache lobster costume equipped with huge claws!…at least it wasn’t my nemesis the “running banana” that I usually get passed by!

I felt great pretty much the entire race and survived the rainbow bridge around mile 20…felt even good until I hit 23…and after 2 more short steep bridges (that totally caught me by surprise) I was toast!…boy this race… I really wanted to stop even .6 miles away…but squeezed every last drop through the nausea and dizziness..to drag my body over the finish to preserve the time I had.

Later when I arrived in the U.S. Patty told me my time was fairly even the entire race…which was shocking to me.  I thought I ran well until 23 and fell off the edge (I just stopped looking a my watch at that point).   Once I saw my time after passing the finish my thoughts quickly went to …how can I get my medal, free cool Tokyo towel…then sit down!

What really made this a great finish (not the agony of defeat)…was walking into the huge warehouse/hangar area to get your bag.  There was thousands of perfectly arranged rows of bags with hundreds of volunteers.  As I walk in,  I see groups of 5 volunteers in every few rows …clapping/ congratulating you and personally telling you “great job”…You felt like you were in those movies….were you just jumped out of your jet fighter (Independence Day) and walk into the jet hangar with the crowds cheering as if you killed the alien invaders and saved the world! I did feel I was in hell for a few miles (does that count?)…so 3:52 didn’t feel so bad.

The next best thing that happened that night was showering, sleeping for 2 hours and waking up to Wayne bringing in dinner….a McDonald’s Quarter Pounder, fries and an apple pie….ohhh my god…it was beautiful!

So I know this is the longest blog ever…but there were too many stories to leave out.  Thanks to all for the encouragement and emails… (Yes, Mary I saw Mr. Roboto…I did tell him Domo Arigotoo)

I have attached a few photos for fun…one is your courtesy Tokyo “screen saver”..as your free gift.  haa haa Haa…If you are wondering where it came from…I actually took a picture using my camera phone of my new souvenir purse…..it became art!

(also included a photo from my blog # 1..me sleeping to sfo) 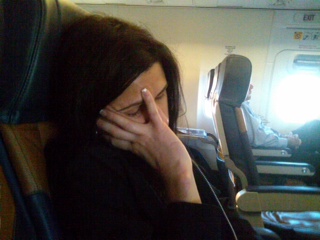 Posted in Quest Club | Comments Off on 2011 Tokyo Marathon

The next club events are the Tokyo Marathon, Napa Valley Marathon and Southwest Spine & Sports Mountain to Fountain 15K.

Here are some first-person accounts from Quest Club members following the 2011 P.F. Chang’s Rock ‘n’ Roll Marathon and Half Marathon. Quest Club had another really good day. Congrats to you all, especially Chris Marsh and Barb Wissman who ran a very courageous marathon.

I went 1:58 and was out too fast so paid for it later.  I was holding 8 – 8:30 pace and trying to slow down.  Blisters set in at 4 miles… got to 9 miles and had to walk for a minute then ran again-did that thru the finish and that worked pretty well. Pretty happy with it- not bad for 3 weeks if training! – Mindy Schmidt

Jeff Daer ran 1:38:29. He started with the 1:35 pace group, but was hurt by a fast start and erratic pacing. I believe this was Jeff’s 1st back-to-back sub-1:40 half marathons since he became a father.

Dave Daer ran 1:44:34, a 4 minute improvement from the Fiesta Bowl Half Marathon. Met his goal of sub-1:45. Very satisfying effort.

Posted in Quest Club | Comments Off on Quest Club Results at the 2011 P.F. Chang’s Rock ‘n’ Roll Arizona Marathon and Half Marathon

On Sunday, 12/19, our long run will go around Camelback Mountain. The loop is about 14 miles. If you are planning to run farther than 14 miles, do the extra miles on the end of your run since we don’t exactly know how far the route is. If you are one of our slower runners who needs a head start, meet Coach Moore at 6:30 am at Hava Java for instructions. Everybody else should meet at 7 am. If you are planning to run less than 14 miles, there is a short cut at the start that will save you about 1 1/2 miles, and Coach Moore can pick you up when you have gone far enough.

Here is a general course description:

Photos from the 2010 Quest Club Holiday Party are posted on AZRunning.com. 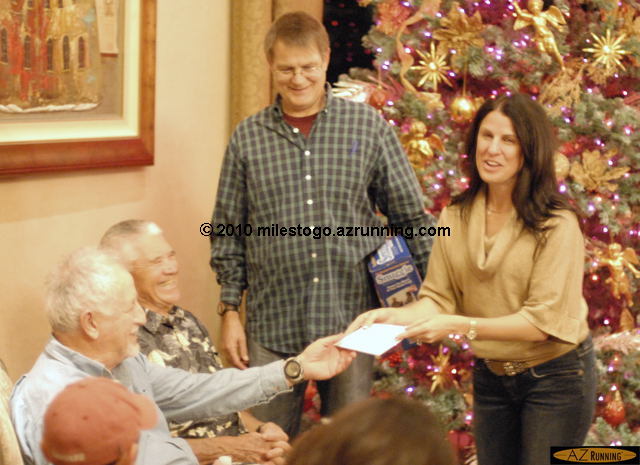 First breakfast run will be this coming Sunday, November 21st at 7 a.m. Meet at AJ’s parking lot on Central/Camelback Ave. Run north on the running path on Central to Canal. Go east on canal and turn around for an out and back long run. Breakfast following run! Hope to see you there!

Posted in Quest Club | Comments Off on Sunday Breakfast Run

Quest Club members successfully competed in three Phoenix area races on November 7. In the inaugural Women’s Running Magazine Women’s Half Marathon Scottsdale-Tempe, Mary Orr captured first place in the 65-69 age group, and posed for a picture with a young admirer afterward! Below are all Quest Club results: 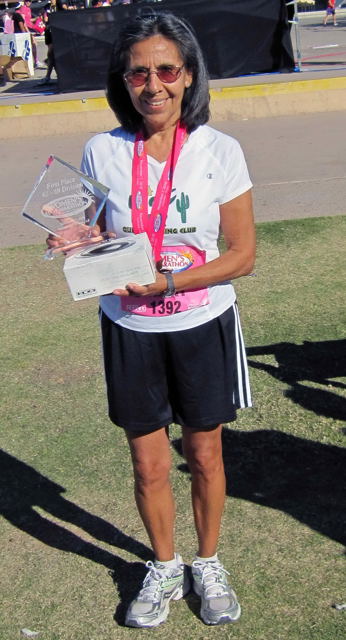